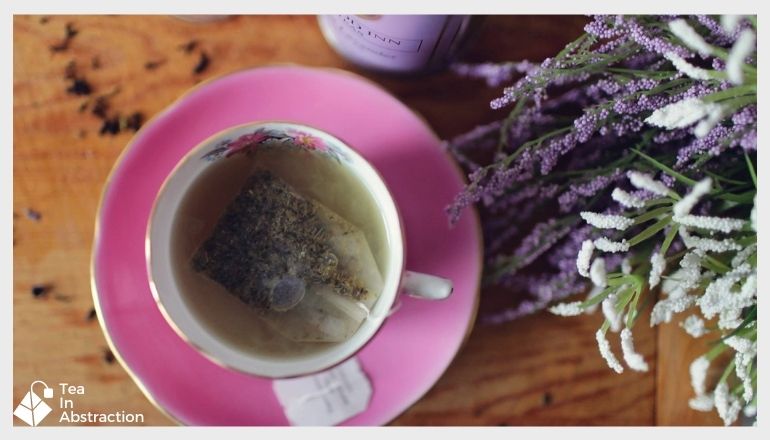 I’m of the opinion that Ginger can make anything taste better. So I decided to try and make a ginger and lavender herbal tea blend that gave me enough Ginger flavor without overwhelming the lavender flower. Or vice versa.

And if you’re here then I suspect you had the same idea. So let’s take this little journey together on how to make a great cup of ginger lavender tea.

What Is Ginger And Lavender Tea? Lavender Ginger tea is an herbal infusion derived from steeping ginger root and lavender flowers in water. It typically has a floral, peppery flavor representative of the ingredient’s own unique flavor profiles.

Ginger is a great herb to blend with other teas, but lavender is no stranger to a good herbal blend either. Let us see how well these two fantastic herbal teas blend together.

For a quick DIY tea bag blend try Buddha Teas Organic Ginger Root Tea and Organic Lavender Tea. This will give you a great cup of tea if you don’t want to bother with fresh ginger and the like.

Read on to find out how to make ginger lavender tea for yourself and what a cup should taste like when steeped properly.

How To Make Ginger Lavender Tea

Lavender and Ginger tea is a pretty straightforward herbal tea blend to make. It’s very tough to over steep it or mess up in any way really. That being said there are a couple of things you want to keep in mind when making your cup of lavender ginger tea. It is very similar to making a cup of straight lavender tea.

Let’s have a look at those now.

If you are looking for a convenient lavender ginger tea option they can be tough to find without a couple of added flavors.

Use The Right Water

One important aspect of making your cup of ginger lavender tea or any tea for that matter is to make sure that you used good quality water for the infusion.

Try and stay away from mineral water and distilled water as they will negatively affect the overall taste of your tea.  Regular tap water is also a no-go because it has a lot of minerals and it that can affect the taste.

Ideal you want to use either filter tap water or a good quality bottled spring water to steep your tea.  This way you get nice balanced water that’s not going to add too much in the way of flavor or take too much away from the Flavor of your lavender ginger tea.

Keep in mind that these are only suggestions, you can add or subtract from the ingredients to make your cup of tea specific to your tastes.

You can also use dried loose leaf ginger and lavender to make a quick cup of this tea. I recommend about a teaspoon of each and a 10 minute steep.

Lastly, you can always use lavender and ginger tea bags for your cup of tea. This is the easiest way to make a cup of this herbal blend. Just use one teabag of each and steep to taste. Use a little bit more water with two tea bags to get a more balanced flavor.

Lavender And Ginger tea is very much the sum of its parts.  Both the Ginger root and the lavender flowers bring their own unique flavors to the blend without canceling each other out or without one overpowering the other.

As a result, you get a fairly complex flavor profile that highlights the wonderful flavor of the lavender as well as the incredibly unique flavor of the ginger.

One thing to add is that taste is always very subjective. These are the flavors that I feel are most representative of a good Lavender and ginger tea. Your mileage may vary so only use this as a loose guide for this herbal tea blend.

The first flavor that I think you’re going to notice is the floral flavor of the lavender itself. The flavor of lavender is pretty pronounced. it’s not as flowery is some other flower herbal infusions but it will be the most dominant flavor of the entire ginger lavender tea blend.

Lavender handsome naturally Minton notes to it because it is a part of the mint plant family. They are not as strong as a spearmint or peppermint tea but they do give it a nice little Edge that acts as a bit of a counterpoint to the strong floral flavor of the lavender.

The good news is that the ginger does not wipe away the mintiness of the lavender. It’s still very much there although I think it’s a little more subdued in this blend than it would be in a cup of straight lavender tea.

And A Little Spicy

Anyone who’s used a slice of Ginger to clean their pallet when they’re eating sushi will know that you get that little burst of spiciness followed by the wonderful gentle incredibly flavorful Ginger afterward.

Earthy Notes In There As Well

Both the lavender flowers and the ginger root have a bit of an earthiness to their overall flavor profile. I think it’s much more pronounced in many of the other root herbal teas than it is in ginger tea itself. The spiciness of the ginger, I think, really helps to smooth out the earthiness.

Likewise, the natural minty flavor of the lavender helps to alleviate some of the earthiness of standard lavender tea.  So it’s not a real strong earthy flavor in this herbal tea blend but it might be there for some people if they’re really susceptible to the earthy or bitter flavor that some of these teas can have.

The ginger really helps smooth out the lavender’s earthy flavor and makes the overall infusion a little bit more palatable for people who aren’t used to drinking a lot of herbal teas.

The Aroma Of Ginger Lavender Tea

I never found ginger tea to be that aromatic.  Which is surprising because Ginger itself is quite pungent. However, when you boil it in the water it seems to lessen the effect of the ginger aroma.

That doesn’t mean that it’s not there I think it’s just a bit subdued especially when you add in the very robust floral Aroma of the lavender it kind of takes a backseat in the smell only. If you’re talking about taste, I think they are both on equal footing in the lavender ginger tea.

That brings us to the end of our look at the ginger lavender herbal infusion.  I always like to add ginger to just about any herbal infusion just to see if it works well with the other flavors.

I’m happy to report that I feel like this is a great herbal infusion that really gives you the benefits of both the lavender and the ginger.

I think the taste of each ingredient compliments the other and together they form a very smooth and refreshing herbal tea that is quick and easy to make.