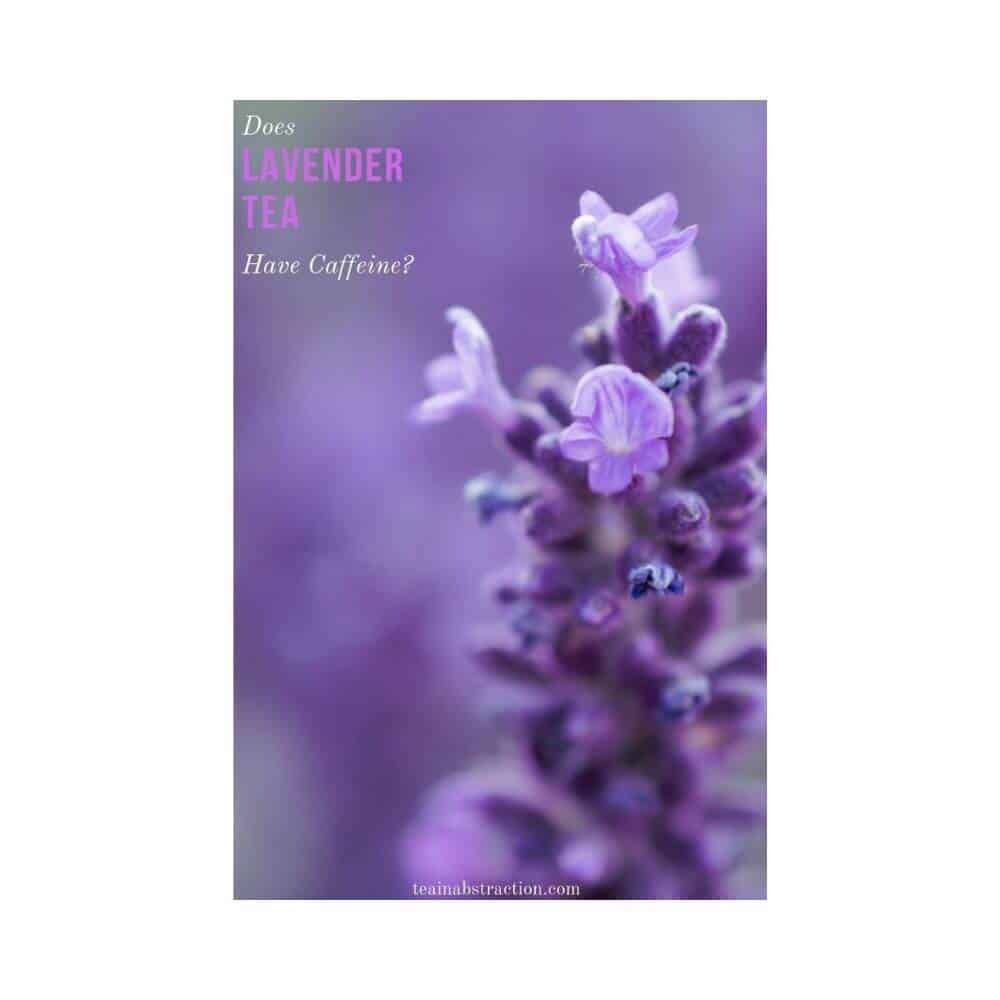 Every week it seems like someone is discovering a new herbal infusion and then we see the popularity of it start to grow. And with that growing popularity comes a lot of questions.

One of the most popular ones for lavender tea is

Does Lavender Tea Have Caffeine? Lavender Tea is caffeine-free.  Completely. You can drink it any time of day or night without worrying about it messing with your sleep rhythms.

If you are just interested in finding a great lavender tea to try out then I suggest The Tao of Tea Loose-Leaf Lavender Tea(*affiliate link), available on Amazon.

So let’s take a closer look at lavender tea and caffeine. What are the benefits of a caffeine free tea, are there good benefits to caffeine? And a selection of related questions that can help give you a better understanding of lavender tea in general.

A real tea, that’s the tea that comes from the leaves of a tea tree, has caffeine. The level of caffeine depends on the type of tea. Black tea typically has the most when talking about true tea.

But they do not actually tea they’re simply plants infused in water.

Real teas have caffeine unless they’ve been decaffeinated. Most herbal infusions do not have caffeine because of the plants they are infused from.

In the case of lavender tea, it comes from the Lavender plant. Lavender is part of the mint plant family and has no connection to Real tea at all.

The confusion I think comes from the fact that we call Herbal infusions herbal tea.

So when they see in a store a box of lavender tea, they’re going to instinctively assume that that has caffeine just like a normal tea would.

So this type of educating people on the differences between herbal teas and true tea is incredibly important.

In order for people to make a more educated decision on what they’re buying and what they’re ultimately drinking.

Caffeine is a stimulant. As a result, it can keep you awake if you drink it right before bedtime.

This is why it’s not advisable to drink green tea or black tea or any other Realty right before you’re ready to go to bed because it could interfere with your sleep Rhythm.

The great thing about lavender tea, check out my review of this great lavender tea, is you can drink it anytime. Because it is caffeine-free it won’t act as a stimulant on your system.

Therefore there’s less of a chance it’ll keep you up at night.

That doesn’t mean you are necessarily going to get a great night’s sleep but at least the lavender tea won’t be to blame when you can’t fall asleep.

Some Pros and Cons Of Caffeine

In addition to being a catalyst for sleep disturbance, caffeine has a few other issues that you might want to be aware of when deciding on what type of tea to drink.

This table on the NCBI website is a great visual aid for the benefits and issues that can arise from caffeine consumption.

Substituting a caffeine-free lavender tea for a regular tea during the day might be a good idea to keep your overall caffeine intake down. 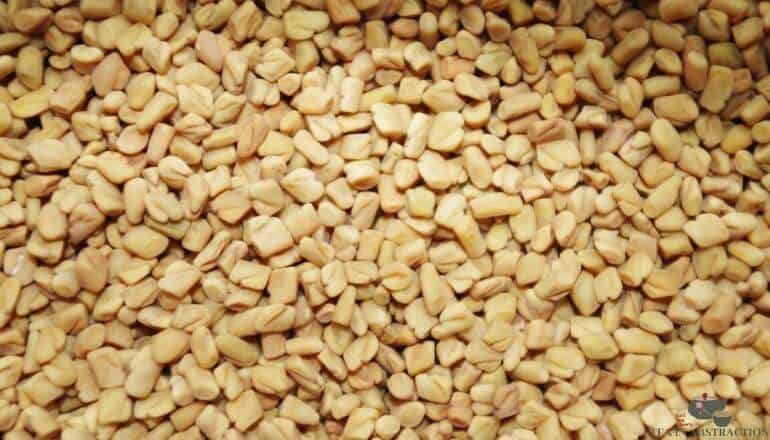 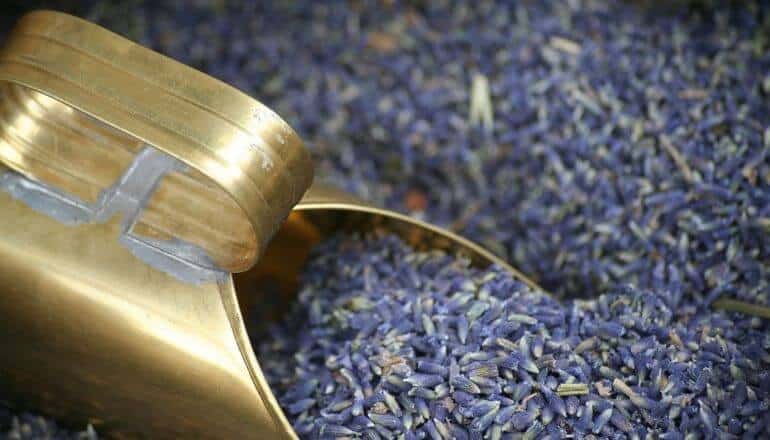 How To Make Lavender Tea? Crafting An Herbal Flower Delight 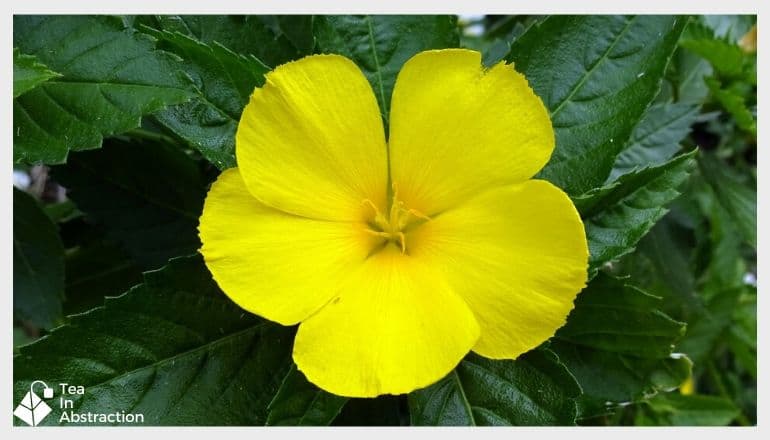 When you mix lavender tea with real tea, which is an incredibly popular thing to do, then obviously that lavender tea ceases to become caffeine-free.

So just be aware of what you’re mixing it with when you decide to blend lavender tea with other infusions or tease.

Of course, if you choose to mix it with chamomile tea then you are still going to have the benefits of a caffeine-free beverage.

So you need to really look at the brand that you’re buying and decide whether or not you want to take the risk of having any caffeine at all with your lavender tea.

Does Lavender Tea Have Carbs? Like its calorie content, lavender tea has a very minimal amount of carbs per serving. It would be what I would consider a negligible amount of carbs. It’s a reason why Lavender tea is a good choice for anyone on a keto diet.

Does Lavender Tea Make You Sleepy? Lavender Tea has been shown to calm some people and aid in their sleep rhythms(source). It is not a remedy for sleep issues, however.

That brings us to the end of our look at this important aspect of lavender tea. Caffeine is not such a bad thing in moderation.

But you don’t want to have every beverage that you drink during the day to have loads of caffeine in it.

And that’s where a great herbal infusion like lavender tea can come in.

But without having to worry about some of the impacts that too much caffeine can have on your overall being.

I hope you enjoyed this look at lavender tea and it’s caffeine content and check back soon because we will have more information on all types of herbal infusions and tea in general.