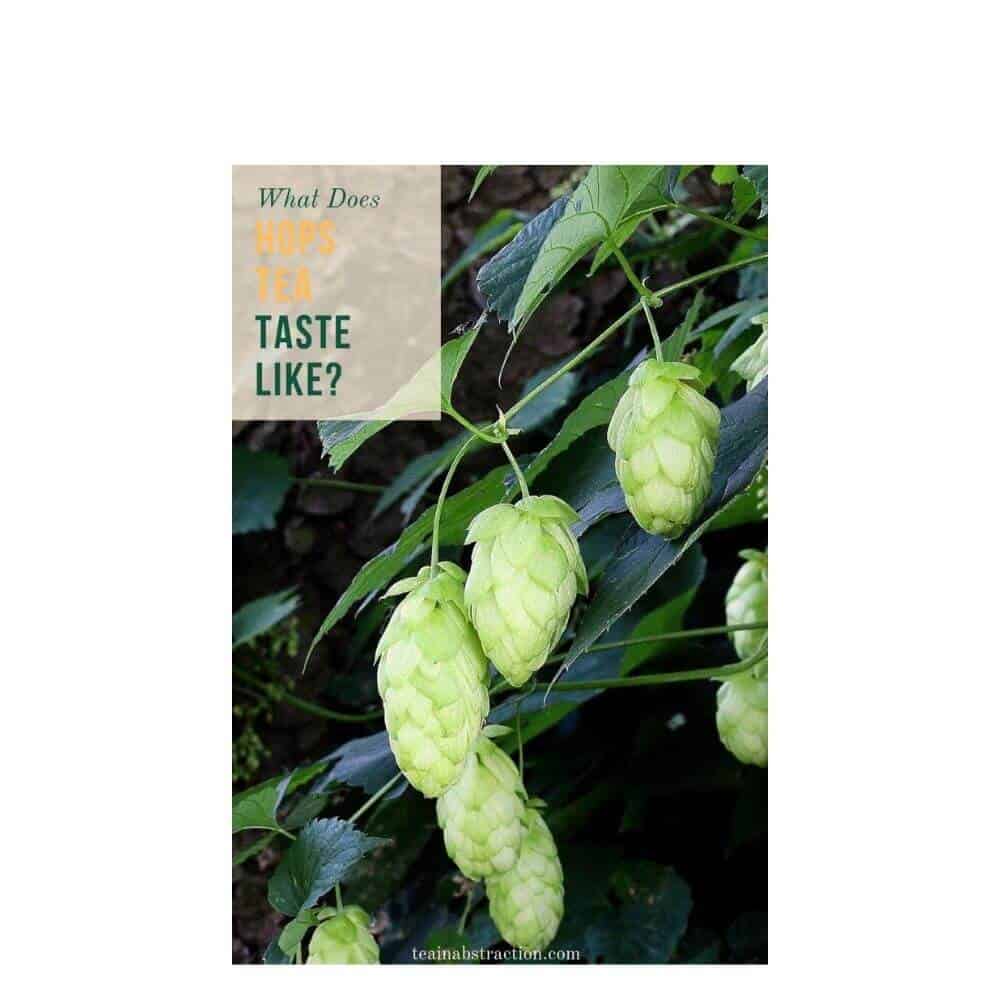 Long before it was used to create beer, hops were steeped in water to make an interesting herbal tea. Hops tea has only just begun to become popular in the western world.

What does hops tea taste like?   Hops tea tastes a little bit like a beer but not nearly as pronounced. It also has a very strong and sometimes bitter flavor that rounds out the overall flavor profile of this tea. Hops Tea has very little natural sweetness if any at all.

If you are interested in a good example of a hops tea then I suggest giving Buddha Teas Organic Hops Tea(*affiliate link) a try,

It is one of the lesser-known herbal flower infusions, you can find other great examples of herbal flower teas in our article here. Read on to find out exactly how these flavors balance and mix with each other to create this interesting herbal infusion.

In my opinion, there are four main flavors that I detect in a cup of hops tea. The real problem with trying to convey what this tea tastes like is it the only thing you can really compare it to is beer because that is the basic flavor.

Does it really taste like beer, I don’t think so as someone who drinks beer quite often.

But that’s the closest example that I’m going to be able to give you exactly what it tastes like. It was dive into each individual flavor and see what we can find.

The first thing you’re going to notice is that  Hops tea is quite bitter. Even when you steep it perfectly for the right amount of time with the right temperature water.

Even when you do everything you need to do when steeping tea, it still comes out a little bit better.

That’s just the overall flavor profile of this particular herbal infusion.   As a result, you might need to put a little bit of honey or sugar into it if the bitterness is a real problem for you.

As mentioned before there’s a slight beer flavor to it. The hoppiness of the tea is very similar to that of a beer such as an IPA or another very hoppy beer.

Unlike beer, hops tea has the overwhelming flavor of the hops. Whereas in a beer it’s only part of the larger flavor profile.

Here it is the main flavor that you’re going to taste. So if you don’t like hops you are not going to like hops tea at all.

And conversely, if you don’t like beer you might have a tough time enjoying hops tea. Not always but there is enough a beer flavor to put some people off.

Another thing I notice about hops tea is that it’s very strong. When you steep it properly it comes out with very potent strength to the flavor.

Hops are very strong flavored plants even when used in other products like beer,  Where they were only a part of the flavor profile.

Here though you get the full flavor of the Hops flower. Quite refreshing but you need to be prepared for the strong bitter flavor.

This might put some new drinkers off but I recommend giving it a try and maybe having a couple of cups to try to get used to it.

Keep in mind that the strength of a flavor is very much subjective, as are all flavors really. What might be strong to me may not be at all to you. So, in my opinion, hops tea has a very strong flavor associated with it.

Hops Tea Is A Little Earthy

I haven’t seen this in too many places but when I drink hops tea I get a sense of a little bit of an earthy taste to it.

The earthy flavor is pretty common among many herbal flower tease, you can check out some of our favorites right here.

You get much more of an earthy note from the smell of the flowers than you do from the steeped tea, however.

The last thing I’ll say about the flavor is that there is very little if any natural sweetness to this tea.

Many herbal flower infusions have at least a tiny bit of naturally sweet flavor to it. It usually helps cut through the bitterness of many of these infusions.

But not in this case, some people to take a slight sweetness I personally do not. It’s not a real problem for me but many people are going to be put off by it and it can be overcome by adding just a tiny bit of Honey to your hops herbal infusion.

Hops Tea Has a strong Aroma similar to how it tastes. The overall Aroma of the Hops flower gives a sense of what are hops heavy beard smells like.

It’s interesting the difference between the smell of hops tea and how the Hops flower to self smells like.

As for just the tea when you smell it and then drink at you get a very similar aroma and taste overall.

A Quick Look At The Hops Flower

The hops flowers, whether it’s dried or fresh, have a very grassy, earthy smell to them.

Some would say it has a smell similar to cannabis. This is because a few of the primary base Aromas are myrcene, beta-pinene, and alpha-humulene, these are very similar to what you find in cannabis(source).

Overall, the smell of the hops flowers and the hops tea are pretty similar. That is not always the case, as we have found in some of our other flavor profiles.

Sometimes what you expect from the smell of the flower is not at all what you get from the taste of the herbal infusion.

Does Hops Tea Have Carbs?

Hops tea is generally carbohydrate-free as long as you are not eating the hops themselves. Typically when you steep herbal plants for a tea you do not imbue the water with a significant amount of carbs.

Sort Of. It tastes like the hoppy part of a beer. It really depends on the type of beer that you like to drink. In my opinion, there is a hint of beer flavor but it doesn’t necessarily taste like been exactly.

Does Hops Tea Break A Fast?

Hops tea is calorie free so it should be just find while fasting. Water should still be your main beverage while fasting but you can incorporate a cup of hops tea every now and again.

And that brings us to the end of another flavor profile of another very interesting and underserved herbal flower tea. Cops are connected with beer. That’s just where we think of this flower is being at its most productive.

But there are places where you can buy pre-packaged bagged hops tea and steep your own. You can also buy loose leaf hops and toss them in a pot of steeping boiling water and create your own.

It’s really interesting that it hasn’t taken off as much as you would think it would. Given the popularity of beer in the world.

But that’s how these things go sometimes I guess. People are starting to take notice. Hopefully, this will give you an idea of what to expect from this herbal infusion.

So if you’ve never heard of hops tea or if you’ve never tried it I urge you to give it a try. You can find it and many of our other favorite flower teas and our article of some of the best flower herbal teas that you can try right now.

Give it a whirl and see if you like it or if it’s just a little bit too out there for you.

Thanks for taking the time to read the article and as always have a wonderful day.