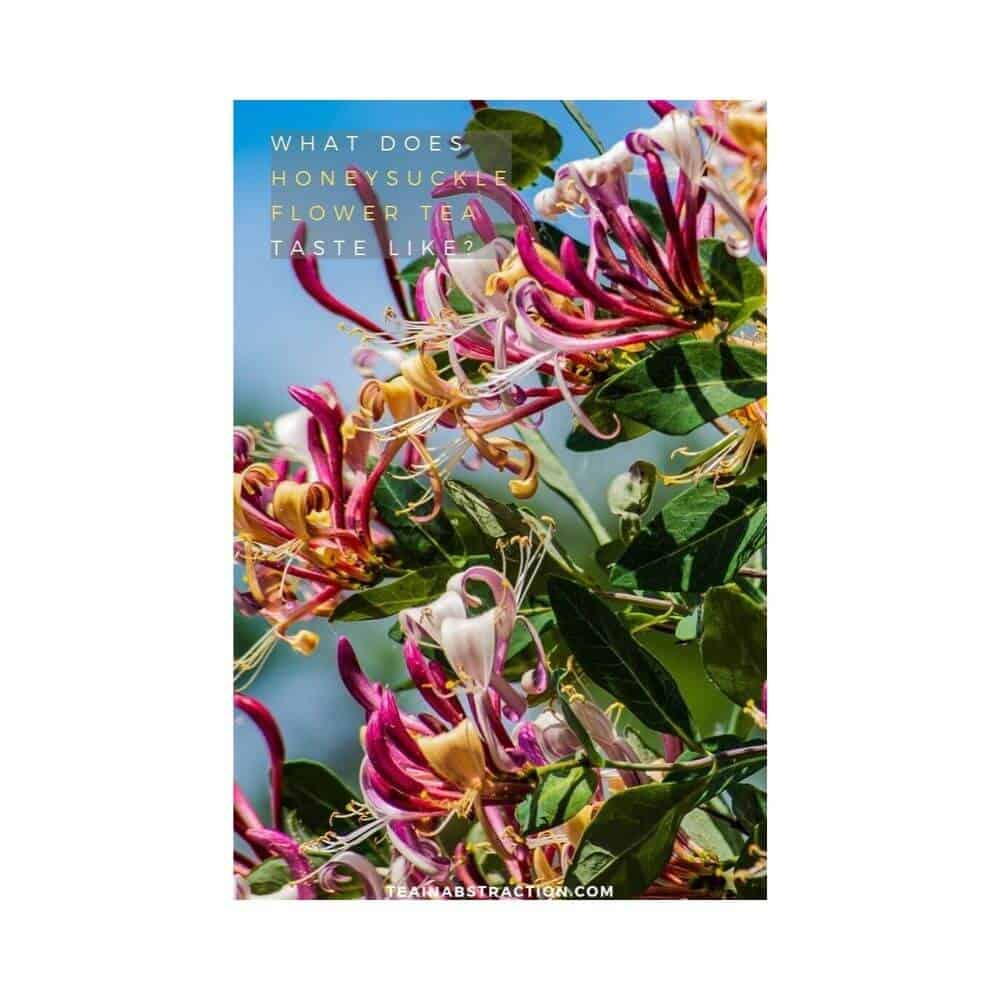 So you thinking about trying honeysuckle tea for the first time and you want to know what to expect from this relatively unknown herbal infusion.

You have come to the absolute right price cuz I am going to take you through the flavor profile step by step.

Just keep in mind that this is what I taste when I have a cup of honeysuckle tea and your experience may be different depending on a variety of factors.

So just use this to the starting point for what to expect from this wonderful flower herbal infusion.

What Does Honeysuckle Tea Taste Like? Honeysuckle flower tea has a slightly sweet flavor to it that reminds me of a natural honey flavor. There’s also a slightly Floral note as well as a tiny bit of an earthy flavor to round out the overall taste of this fantastic herbal flower infusion.

Read on as we take an in-depth look at each one of these flavor notes to get a good picture of the overall flavor profile of this very interesting herbal tea.

Let’s get into it…

Honeysuckle flower tea has a very subtle sweet flavor to it and it’s something that you’re going to notice right off the bat if you’re a pretty experienced tea drinker.

the interesting thing about these naturally sweet teas is that a lot of times newer drinkers won’t be able to pick up on the sweetness.

The main reason for this is that they are used to drinking sugary drinks as opposed to sweet drinks.

The natural sweetness of honeysuckle tea is not overwhelming it’s not going to be like drinking a glass of fruit juice. It’s going to be very subtle and can be overlooked if you’re used to the more sugary beverages.

So if you don’t taste on your first couple of cups of tea don’t worry about it eventually you’ll get your palette to tell the difference between the real sugary stuff and naturally sweet stuff and then you can enjoy your cup of honeysuckle tea that much more.

It Has A Natural Honey Flavor

It is not called honeysuckle tea for no reason. The next flavor that you’re going to notice in this wonderful herbal tea is really an extension of the naturally sweet note that  I talked about in the last section.

There’s a distinct honey flavor to the T although it’s not nearly as pronounced as it would be if you simply ate the flower and its raw state.

A Bit Of A Floral Hint

In addition to the sweetness that you’re going to get from a nice cup of honeysuckle tea, there is a very subtle floral flavor permeating through the entire cup.

This floral flavor isn’t as overwhelming as, say, lavender tea or a rose tea for example but it is there and it is very noticeable.

I think it helps balance out the sweetness and the earthy flavor, which I’ll get into in a second, and create a really balanced and drinkable cup of tea.

A Touch Of An Earthy Tone

The next Labour I want to talk about in the honeysuckle tea is a very slight earthy flavor. You’ll find that many of these herbal teas tend to have a little bit of an earthy flavor across the board.

This is particularly true of herbal flower infusions as the floral notes don’t really overwhelm the earthy flavor as much as some of the stronger herbal teas.

So when I say earthy it’s a bit of a strange flavor to try and describe. It’s a slight bitterness that you would expect from most teas.

Imagine The earthy taste being the same as the smell of freshly tilled earth and that’s what you get when I describe an earthy flavor.

Still, it’s very subtle and you may not even notice it, I think a lot of people won’t notice it especially if you’re new to herbal tea.

The last little flavor note of the overall taste profile of honeysuckle tea that I want to talk about is not really a flavor per se.

It’s an overall feeling of what it’s like to drink a good cup of honeysuckle tea. The one thing that comes to mind is that it’s a very refreshing tea.

It makes for a great iced tea. It’s light and not really robust her overwhelming and its flavor. All the flavors the sweetness in the floral flavors and the earthy tones blend together really well to make for a very mild and very refreshing cup of tea.

This is the type of tea that you can drink at any time during the day or even just before bed and you’ll feel right at home doing so.

The aroma of honeysuckle tea is pretty straightforward. It closely follows the overall taste profile.

There’s a slightly sweet honey aroma to it and a nice floral smell as well.   The floral smell is a little more pronounced than what you get when you actually drink the tea.

They’re very similar in there Aroma if not the potency of that aroma. The one thing I don’t notice when I smell the tea is the earthy flavor it just doesn’t seem to be there.

This isn’t really unusual because the earthy aroma is really tough to detect with the other floral and sweet smells floating around in the air.

Finishing That Cup Of Honeysuckle Tea

It’s a great choice for someone who’s new to herbal teas and just looking to get their feet wet a little bit without getting overwhelmed by a huge amount of different flavors and textures.

But I will say that the overall flavor is very mild and I would argue that it can be described as a little bit bland.

I think honeysuckle tea really shines when you start to blend it a little bit with some other herbal infusions or with an nice sencha green tea.

It also works well as a base for creating herbal blends with spices and citrus fruits and other common flavors that you would add to a tea.

The only thing you need to watch out for with honeysuckle tea is making sure that the amount of flavoring that you’re putting into doesn’t completely overwhelm the flavor of the honeysuckle tea itself.

I hope you enjoyed our look at honeysuckle tea and be sure to check out all of our other tea content and I will see you back here very soon.

Thanks for stopping by and as always have a wonderful day.