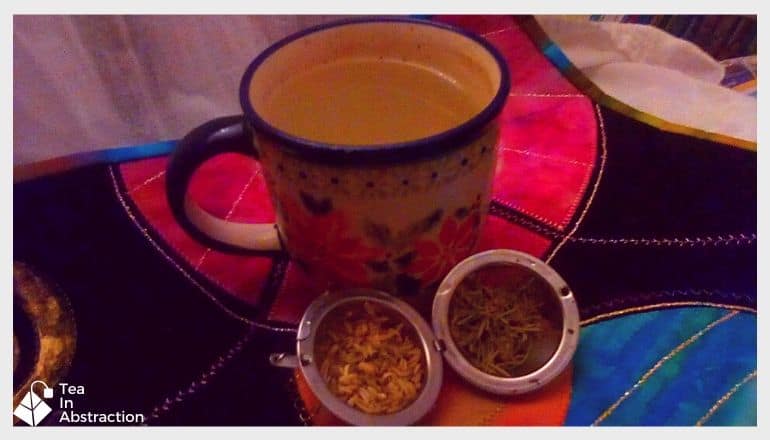 Hello everybody, we are back again with another look a great herbal infusion that is going to be a little bit outside of the mainstream.

You’re probably not going to be able to find this particular herbal infusion in store so you’re going to have to make it yourself, which is most of the fun of having a cup of tea in the first place.

What Is Rosemary Fennel Tea? Rosemary fennel tea is an herbal infusion created by steeping fresh or dried rosemary and fennel seeds in very hot water for a  few minutes. The resulting herbal infusion is a wonderful Savory and slightly sweet herbal infusion with an almost soup-like texture.

If you are looking for rosemary and fennel seed to make your own cup of this wonderful brew I suggest Buddha Teas for teabags of both fennel and rosemary tea(*affiliate link).

So join me as I dive into the wonderful Rosemary and fennel herbal tea blend.

How To Make Rosemary Fennel Tea

This is another extremely easy herbal blend to make very quickly for yourself. The only real issue with rosemary fennel tea is that you need to get the balance right or the Rosemary flavor will completely overwhelmed the subtle licorice flavor of the fennel seed.

If you really love the flavor of rosemary tea and want that to be dominant than 50 50 is fine but bear in mind that you will only get a slight licorice flavor from the fennel seed if you do go with that type of split.

So I recommend about a 75/25  split between the fennel seed and the Rosemary. I think this gives you the best balance we’re both flavors are at their best without one overshadowing the other to a great extent.

I find rosemary fennel tea to have a very complex flavor. If you get the balance right you get a wonderful herbal blend that is going to be a joy to drink just about any time of day.  Let’s dig into the nuances of the flavor profile for Rosemary and fennel seed tea.

This herbal blend does have a little bit of natural sweetness from the fennel tea and we’ll get into that in a little bit. But the major flavor component of this herbal infusion is a Savory one. This comes mainly from the robust flavor of the Rosemary.

It is incredibly flavorful and really feels like you’re drinking more of a soup than a t because it is so Savory and almost has a hint of saltiness to it.

The savoriness works as a wonderful Counterpoint to the fennel tea and it’s smooth naturally sweet licorice flavor.

With A Nice Piney Flavor

What makes this herbal blend so interesting is the Rosemary flavor. The Piney woody  Taste of the Rosemary is a wonderful compliment to the fennel seed.

It is Tough to describe what a pine-like flavor is. It’s not quite a pine needles flavor but if you’ve tasted Rosemary you’re going to recognize that Piney flavor almost immediately.  It certainly adds a robust flavor to the herbal blend and gives it almost a soup-like flavor and texture when you drink the tea.

And A Subtle Licorice

The major flavor component of the fennel tea is its subtle licorice flavor and this is very much present in the herbal blend. It is somewhat subdued  when compared to a cup of straight penalty but you can definitely  detect that smooth licorice flavor  as it lingers on your lips after you take a sip.

That Is Slightly Sweet

One of The Telltale characteristics of  fennel tea is that it has a bit  of natural sweetness to it. That sweetness comes through in this herbal blend as long as you keep the balance of the tea right.

If you use too much Rosemary that’s natural sweetness does get overpowered by the Savory Piney flavor of the Rosemary.

And Smooth And Tasty

There are some herbal Blends and herbal teas in general that don’t have the greatest amount of flavor with him. They have a flavor but it’s a bit subdued or maybe it’s not as pungent as you might think that is not the case with rosemary fennel tea.

The Rosemary in particular brings a lot of flavor to the preceding and makes this a very enjoyable cup of tea to drink.

In addition to being incredibly tasty the fennel rosemary tea is very smooth as well. Neither of these teas are particularly bitter on their own and when you combine them together they make an even smoother blend that is really a pleasure to drink.

It is something that a lot of people would enjoy even if they’re not used to drinking herbal infusions.

The aroma of a cup of fennel seed and rosemary tea is very tilted towards the Rosemary aroma. Rosemary is such a robust and pungent herb that it tends to dominate the aroma especially if you are using equal  Parts Rosemary and fennel.

Even if you use the 25/75 split that I recommend the Rosemary still going to be the predominant Aroma and that you get from you this herbal blend.

Does Fennel Seed And Rosemary Tea Have Caffeine?

Rosemary tea has no caffeine, neither does fennel tea. So the blend is naturally caffeine-free as long as you don’t introduce any  cheese like black tea white tea or green tea to the blend it will remain caffeine-free so you can drink at any time of day without worrying about the effects of caffeine

I find rosemary and fennel tea great for fasting. As is typical with an herbal infusion it has no calories in the blend and each of the individual ingredients has no calories. No calories make it ideal for anyone in their fasted state

But what I really like about Rosemary fennel tea when I’m fasting is that it has so much flavor and almost taste like a soup it really helps to quell any lingering hunger pains I have after a long fasting session.

Where Can You Buy Rosemary Fennel Seed Tea?

As far as I know there are no packaged fennel seed and rosemary tea blends. So this is one you will have to make for yourself.

If you want bagged versions of rosemary tea and fennel tea I recommend Buddha Teas(*affiliate link).

For those that want loose leaf options I recommend Starwest Botanicals (*affiliate link)as they have dried versions of both.

Fresh rosemary can be found in most supermarkets and I recommend using it at least once just to get a taste of the fresh rosemary.

Can You Use Dried Rosemary?

Dried rosemary works just fine for this herbal infusion.  I’ve used both dried rosemary and fresh Rosemary for this particular tea and both work great.

I am not really sure if you can get fresh fennel seed or what that would even look like but I’ve only ever used the dried fennel seed for herbal tea.

With regards to the difference between dried rosemary and fresh Rosemary, I think the fresh Rosemary has a little bit more flavor and certainly has much more of a pungent aroma and that comes across in the tea.

The Rosemary And Fennel Tea Finish

And now we come to the end of our wonderful little journey into the world of fennel Rosemary tea. This Savory slightly sweet blend is truly remarkable.

It has an almost soup-like flavor and texture and I use it quite often when I’m fasting because it does feel like you’re getting sustenance even though it’s just a calorie-free tea.

If you were going to introduce someone to herbal teas that are a bit off the beaten path and they enjoy the flavor of Rosemary and fennel then this is going to be a great way to  to get them to try a non-mainstream herbal tea and maybe expand their tea-drinking Horizons.

So give this wonderful herbal infusion to try and see if it’s something that might find a permanent place in your tea drinking repertoire.

Thank you for visiting and have a wonderful day.